Found this on boards.ie

Someone made this site taking the piss of our minister for broadband suppression. I’m still on dialup at home in county clare, broadband of any kind apart from satellite isn’t available. We’re only 3 miles from Ennis as well, the Information Age Town. Not much good resulted from that little project.

How did this country fuck up roll-out of broadband so bad? You’d think stuff like this would sort itself out with market forces in a developed and relatively rich economy. Obviously not. The general election’s coming up soon, I’m a 21 year old male, I don’t care for many issues but this. Someone sort it out and they’ll get my vote!

A guy I know used to play quake and hang out in the IRC channels giving abuse to everyone (a boy dave), this Scottish joke had enough and sent this scary video message. Right click on it and ‘Save Target As’. Or just watch it on YouTube.

Twink is an Irish entertainer who’s been around for ages. You can guess by the head of her that she’s a thundering bitch and here’s the proof! She left a voicemail on her ex-husbands mobile giving him abuse because her ‘slut dropped their bastard’ on Valentines day or something. Download the Twink voicemail

Update – Remix version released
Someone with too much time on their hands has released a remixed version called ‘Zip Up Your Micky’! It’s priceless, I must look like a weirdo in the computer suite laughing away to myself. Pretty catchy as well. I wonder do any of the national radio hosts have the balls to play it on air…
Listen to the Twink Voicemail remix on MySpace

I don’t know if this is common around the country but the local pool hall in Galway recently introduced online poker through IrishEyesPoker. They setup a dozen computers in the corner and you deposit money at the counter you can gamble with and they charge you a set fee. The problem is the username and passwords for every account are plastered on the wall! You can use these to log in on your own computer at home and play with someones money or even withdraw it! It’s ridiculous. Here’s one to try: (username) bantry2 (password) eglinton2

The way it works, when you deposit money at the desk and they lodge it, and when you leave they withdraw it. So you have to login when someone is actually playing for it to be money it. Have fun! I don’t fell guilty giving away that user/pass, it’s their own fault for being so stupid.

Media Player Clasic and VLC Media Player are easily the two best media players about, if you’re using spyware ridden RealPlayer or Quicktime, get rid of em now! Note that I use these media players mostly for playing videos, I use Winamp for music just because of habit really. You can get a plugin called Real Alternative to play RM files and I think you also get a Quicktime one but I’ve never used it as you need Quicktime for iTunes.

Windows Media Player is alright IMO but it’s annoying it can’t play partially downloaded DivX and XVid files which MPC and VLC both can. MPC needs time to ‘buffer’ and has problems when you skip ahead in a partially downloaded file, the picture is blurry for a few seconds. VLC seems to play fine straight away. I used to use MPC for all video files because it’s less sluggy, if you skip ahead or pause in VLC, it takes some noticeable time. But lately MPC is showing a green vertical bar in Xvid videos (which along with DivX is the most used codec of downloaded TV shows) which is very annoying. So it’s VLC now. But it could change again. What’s certain is the best free media player is one of these two. What do people prefer?

Found this article on Digg, some joke was hotlinking to a webmasters images, and when the webmaster stopped it or deleted the images, he threatned to sue! Here’s the email he sent.

My current desktop. How exciting. God, this is a crap blog, isn’t it? 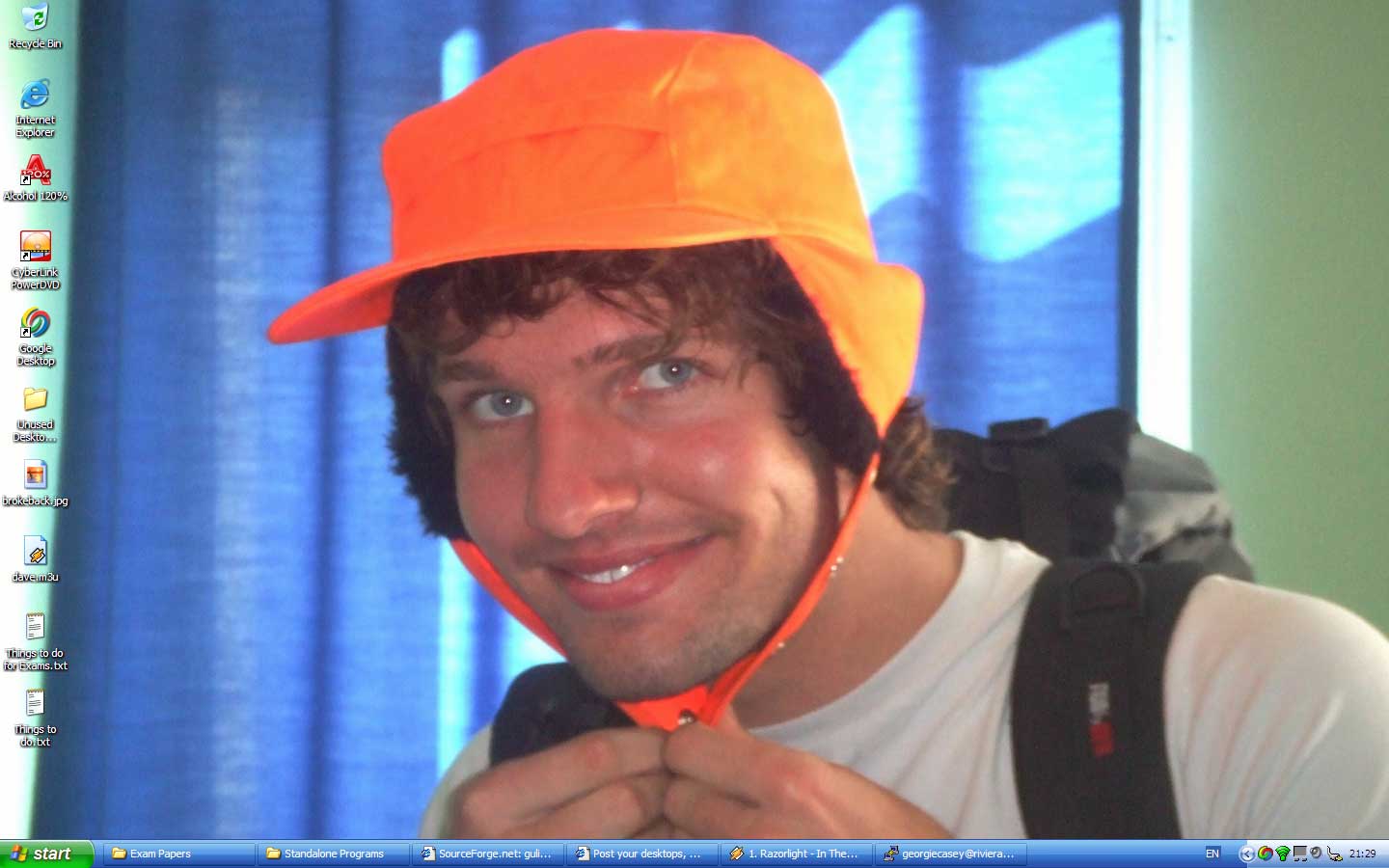 i’m a sick bastard, i was hoping to see the snake actually get the mouse in the end. in slow motion.